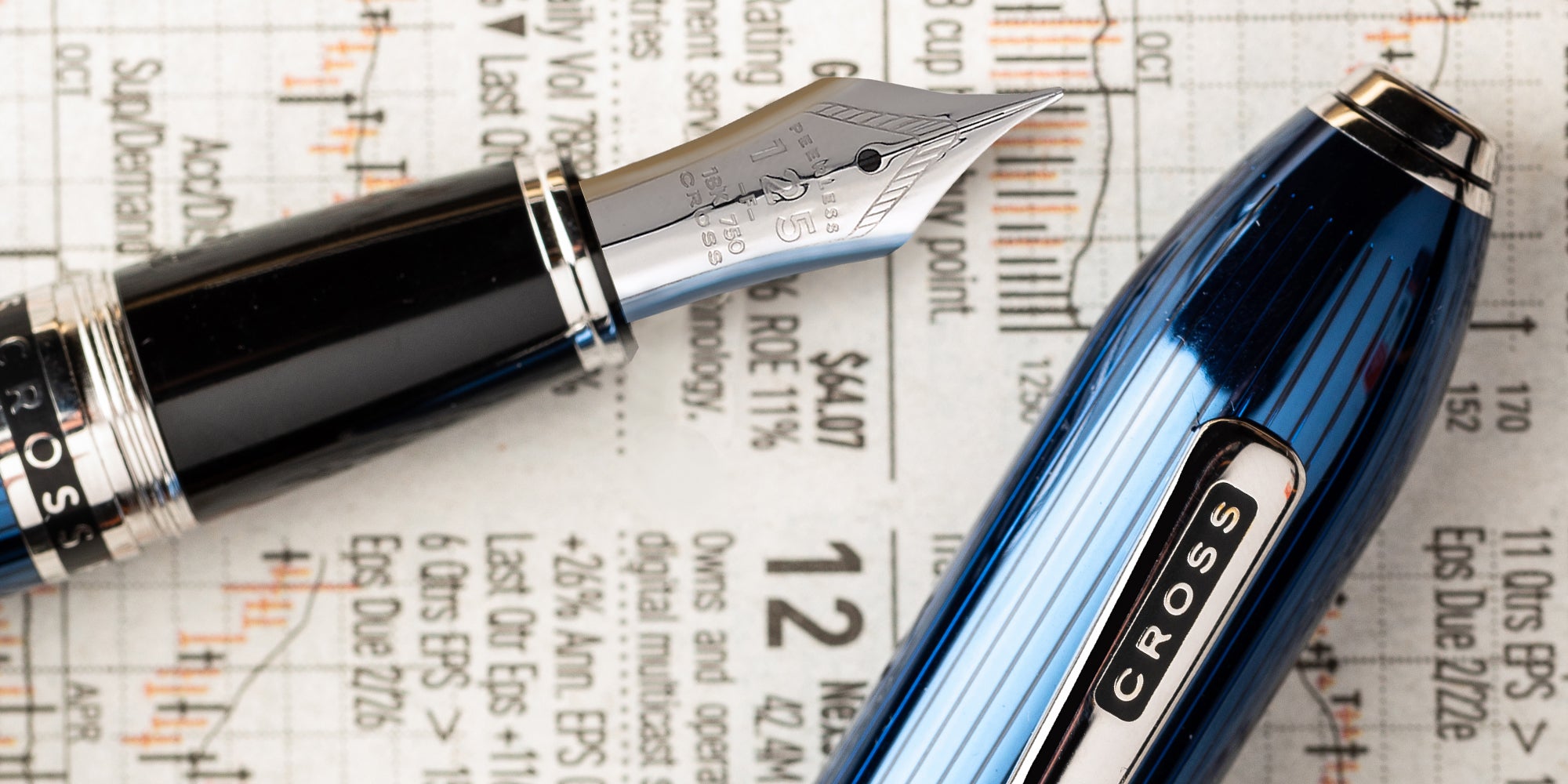 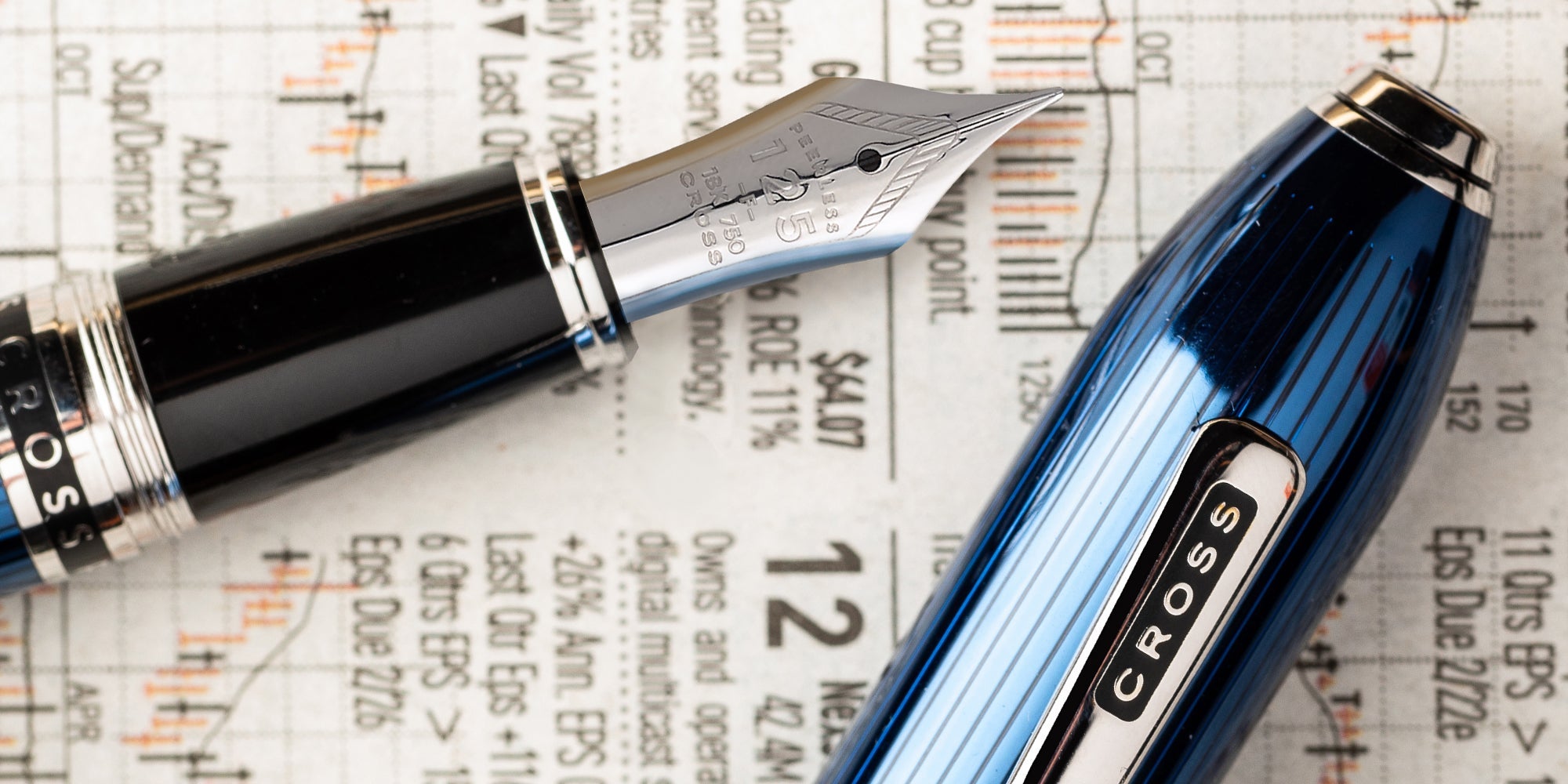 Our Product Expert explains the history and unique design features.

For over 100 years, Fountain Pens have been the preferred writing instruments of famous authors, everyday writers, pen enthusiasts and collectors. So – what exactly is a Fountain Pen? It’s a writing instrument with a metal tip, often referred to as a nib, that is connected to an ink reservoir. The writing action for a Fountain Pen is achieved as the ink flows from the reservoir to the nib through a feed system consisting of channels. This internal feed system moves the ink with a combination of capillary action and gravity. Early feed systems were often made from ebonite, a hard rubber, but most are now developed using injection molded plastic.

Cross has played its own important role in the development of Fountain Pens. Before they were available commercially, Alonzo Townsend Cross, son of our founder Richard Cross, invented the Stylographic Pen in 1879. The writing tip of a Stylographic Pen was a thin metal tube with a spring-loaded wire inside. As the tip was pressed against paper, the spring-loaded wire moved back to release a small quantity of ink through capillary action. This same concept of capillary action was later used when Cross launched its first Fountain Pen, the Peerless, in 1889.

Now - what makes Fountain Pens uniquely special? First, they have a refined, distinctive look that transforms the daily act of writing into a luxurious experience. And because Fountain Pens traditionally use a free-flowing water-based ink, users can write comfortably with very little effort for long durations. The nib of a Fountain Pen is usually designed to remain flexible while in use. This allows writers to vary the amount of pressure they apply and thereby create a variety of line widths. In fact, Fountain Pens are widely known to improve one’s handwriting because the flexible nib adapts to your unique grip and hand motions over time.

Through the years, Cross has added iconic Fountain Pen designs to its collection, drawing inspiration from the Art Deco period in the 1930s. Though shifts in consumer tastes during the 1950s and ‘60s led to a preference for basic ballpoint pens and pencils, Cross Fountain Pens enjoyed a global renaissance in 1984. We have continued to launched popular new Fountain Pens in multiple nib options and design styles ever since.

The Century-style nib was first launched on our iconic Cross Classic Century Collection. Available in stainless steel or 18KT gold, the nib is known for its smooth writing action facilitated by a dual channel feed system. The nib is heat treated to allow a bit of flex while writing. The Century-style nib is currently available on Cross Century II, ATX, Wanderlust, Botanica, Bailey and Calais Collections.

The Townsend-style nib was launched in 1993 and remains a signature of the Cross Townsend Collection. Slightly larger than the Century-style, this nib is distinguished by its beautiful, stamped artwork and is available in stainless steel or 18KT gold. Precious gold Fountain Pen nibs are softer than steel and allow for even more flexibility and line variation while writing.

The Peerless-style nib is featured in the Cross Peerless 125 Collection. This collection was introduced in 2014 to celebrate the 125th Anniversary of Cross’s first Fountain Pen. The large Peerless nib is true to its name and like no other I have ever written with. The delicately crafted 18KT gold nib writes like a dream, providing a smooth, controlled flow of ink and a slight amount of feedback which helps me control my handwriting perfectly.

Anything’s possible when you put pen to paper. I encourage you to try (or keep using!) a Fountain Pen for your daily writing. Today’s Cross Fountain Pens embody our passion for our history, and they’re fueling the promise of achievement for generations around the world. Shop the Cross Fountain Pen Collections.

Tap the image below that best represents the appearance and writing style of your Cross Pen.

Please select any one pen type.

You have selected the option. Cross Rollerball pens accommodate a variety of different refills for a customized writing experience. Tap your preference to continue. 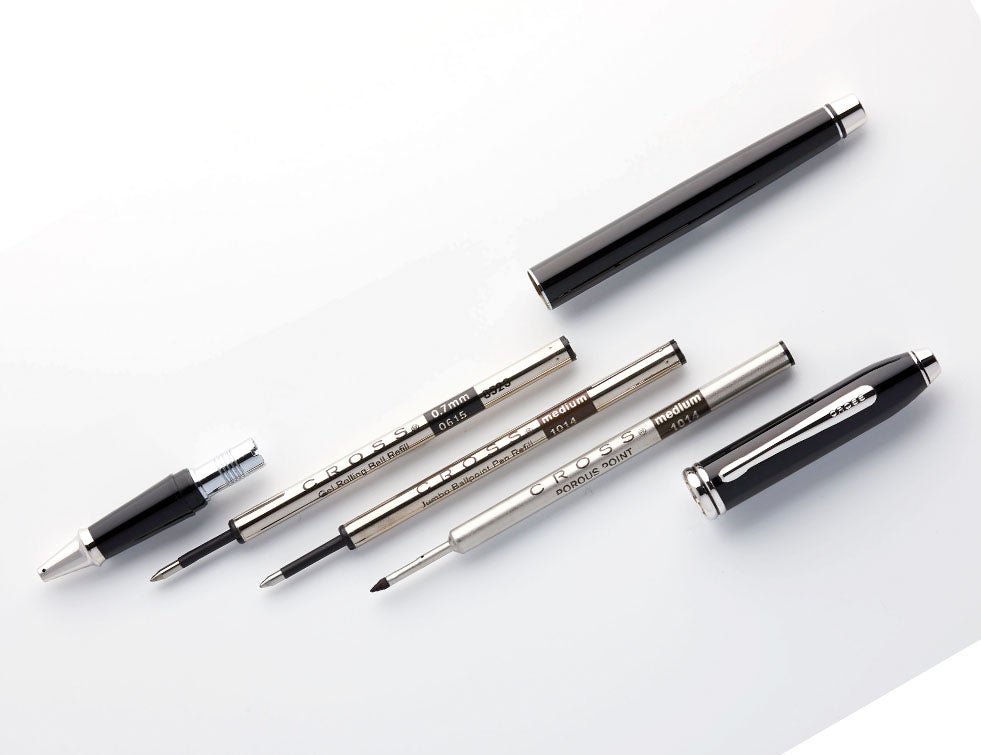